In the first blog of this new series, we are going discuss about career opportunities in App Development.

Can you Imagine life without WhatsApp! Would you believe that this mobile app that has completely obliterated the SMS system of sending messages is not even 8 years old in India? Mobile Apps like WhatsApp, Facebook, Twitter, TrueCaller, Swiggy, Zomato, M-Indicator  etc. are nothing but software programs that run on mobile devices like smartphones and tablets. These apps are developed by software engineers or programmers who design, develop and test the mobile applications on different mobile operating systems and devices.

According to the 2017 statistics, India has over 281 million people using the mobile internet every day. Recently, it has also been ranked as the world’s fastest market for maximum mobile app downloads on popular mobile operating systems – Apple iOS and Google Android Play Store, with Netflix and Tinder emerging as the top two favourite mobile apps. There is endless data to support that in the technology market, app development is the current favourite.

But building a career as an app developer requires planning. For starters, knowledge of programming languages like Objective C, C++, C# or Java is a must. And unless you are an iPhone loyalist, in which case you will only need Objective C, knowledge of other programming languages like Java is required for creating Android Apps and also to develop your own mobile apps. Knowledge of HTML5  is needed for developing cross-platform mobile apps.

Building a career as an app developer requires planning. For starters, knowledge of programming languages like Objective C, C++, C# or Java is a must. And unless you are an iPhone loyalist, in which case you will only need Objective C, knowledge of other programming languages like Java is required for creating Android Apps and also to develop your own mobile apps. Knowledge of HTML5  is needed for developing cross-platform mobile apps.

As an app developer, you will spend your day developing, testing and improving apps. Besides the prerequisite qualification, the job will require you to have a basic understanding of UI and application design. A bachelor’s degree in Software/Computer/IT Engineering, Mobile Application Development,  Mobile Computing or Computer Science  is the minimum most employers look for when hiring mobile apps developers. Interestingly, although most apps are built for the Apple (iOS) and Android platform, neither Apple nor Google offer any courses on app development.

In US & UK universities, there are several short term introductory courses as well as long term modules on App development included in the degree programs of science & engineering of the relevant subjects.

Whereas, Most institutes in India also offer short-term certificate courses in app development. The Bharati Vidyapeeth is among very few universities in India which offers a three years full-time course in Bachelors of Science in Mobile Application Development, admission to which is through an entrance exam for the limited 90 seats.

The smartphone app trend reached India six months late which is why although globally the app usage has grown by a mere 11%, India is still an expanding mobile app market. Quick adoption and integration of advanced technologies have resulted in massive growth in this space with music, media, entertainment, business and finance, and utilities as the top apps currently being most downloaded and used. Another reason for the comparative large-scale growth of local app developers is the low cost of app development in India.

Augmented reality and virtual reality-based apps particularly in the gaming world are quite popular. Furniture stores, retail and real estate industries are also now exploring growth options through AR based mobile apps. Apps based on Internet of Things (IoT) is also gaining prominence.

While the primary job of app developers is to create apps in accordance with the client’s expectations of quality and functionality, they are also responsible for consulting and designing the app’s interface, devising fixes on the app and providing support in the cross-platform alignment of apps.

It has been estimated that by 2020, approximately 300,000 new mobile app development roles will be created which will involve work on iOS and Android apps.

Following are some of the profiles an app developer can work as:

USA & some European countries will remain the highest paying countries for this, In India, the average salary for an app developer is around Rs. 40,000 per month. These figures do not, however, include bonuses and other perks. Employees with knowledge and experience in Spring, Java/J2EE, Hibernate, and PL/SQL command a greater average pay with more opportunities for growth in position and pay.

Along with the core technical skills, app developers should learn how to create a marketable product and optimize its visibility amongst its competitors. The job involves a high level of interaction with the internal team as well as with clients, hence, ability to collaborate well with others, adaptability, strong communication and interpersonal skills will help succeed in this career. Here are a few advantages and disadvantages of being an app developer: 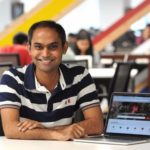 Though he is IIT, Delhi Alumni, but his specialization was in textile engineering, but his interest was more in coding in college days, that proves , it’s more about your keep interest and passion, which will lead you to the success.

VJTI, Mumbai Alumni. Rarely you will find Mumbaikar who doesn’t know the M-Indicator app, A simple concept based app , which changed his life and also making an impact to the lives of millions of daily commuters of the Mumbai City.